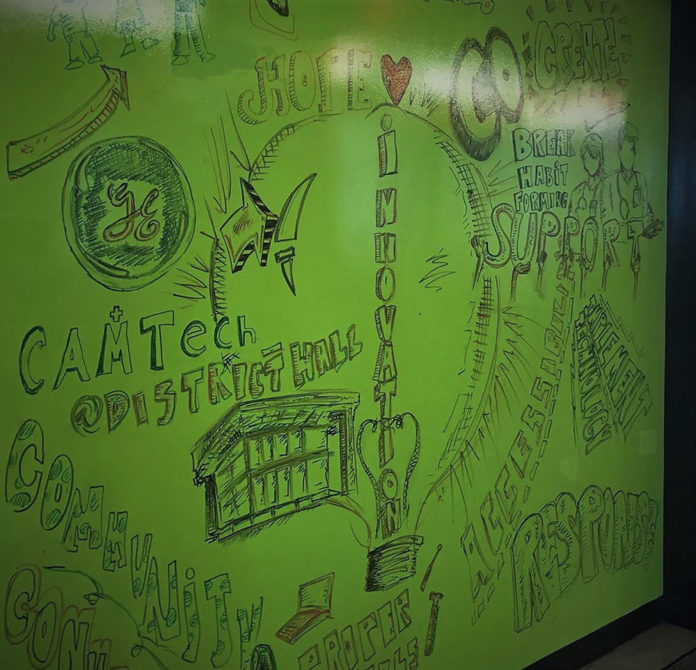 The Consortium for Affordable Medical Technologies (CAMTech) joined forces with the GE Foundation (General Electric’s philanthropic organization) in a hackathon that united more than 220 global visionaries who came up with new tactics to combat the opioid epidemic: prioritizing new approaches to addiction treatment, public health innovations and new strategies for overdose prevention/response.

Last August, General Electric moved its headquarters from Fairfield, Connecticut to Boston. Along came the GE foundation, which has been focused on helping underserved communities gain access to quality health care. Jennifer Edwards, the director of U.S. Developing Health of the GE Foundation, explained that the move to Massachusetts prompted GE to promise a $50 million donation over the next five years to philanthropic initiatives within the Boston community.

“We came into Boston with an idea of what we wanted to focus on the community health space,” Edwards said. “We launched into a two-month listening tour, I met with well over 150 people, and the listening tour is continuing. We really just wanted to understand what the pinpoints were from the community’s perspective, and two things rose to the top: social determinants of health and behavioral health/addiction. Particularly opioid addiction.”

After the move, the GE Foundation announced its investments in the area of opioid addiction and linked with CAMTech, which is based at Massachusetts General Hospital’s Global department and has a similar mission – to use technology to fast-track medical innovations and health care outcomes in underprivileged countries.

“I think it was a collision of good ideas,” said Dr. Kris Olson, director of CAMTech and a clinician at Massachusetts General Hospital. “We were speaking internally about how we wanted to use the CAMTech platform towards the opioid epidemic, and we were contacted by the head of the GE Foundation during that very week. We were already interested and thought that together we could put on an even broader, far-reaching event.”

According to Olson, the first opioid epidemic hackathon reached people from all walks of life – from high-profile government leaders to addiction treatment specialists and people affected by substance use disorders. From September 9 to 11, the 220 participants formed 18 teams and were assisted by 45 multidisciplinary mentors before they pitched 70 different ideas to a panel of expert judges. Five winning teams were selected and awarded $1,000 each.

“The hackathon event was amazing,” Edwards said. “We laid out the problem to our audience from every possible angle. Voices from the field shared their journeys and experiences. The prevalent theme was stigma. I don’t think that’s a surprise to anyone, but the stigma around this disease is a continuing barrier to access to care, to adoption of evidence-based practices of medicine and even to policy change. So there’s a real need to change the narrative.”

Representatives from the GE Foundation are very committed to putting an end to the stigma that surrounds addiction, Edwards said, and they are going above and beyond their original plans to combat the opioid addiction epidemic. “The GE Foundation was so encouraged by one of the five winners that we actually pulled them out of the process, and we already provided them a planning grant to flush out their business model a little more and plan out a potential pilot,” she added.

On January 24, the creators who were still interested in being a part of the competition were invited to… (continue reading) Justice isn’t colorblind when it comes to drug abuse, incarceration and...

Opioids and benzodiazepines: A deadly combination