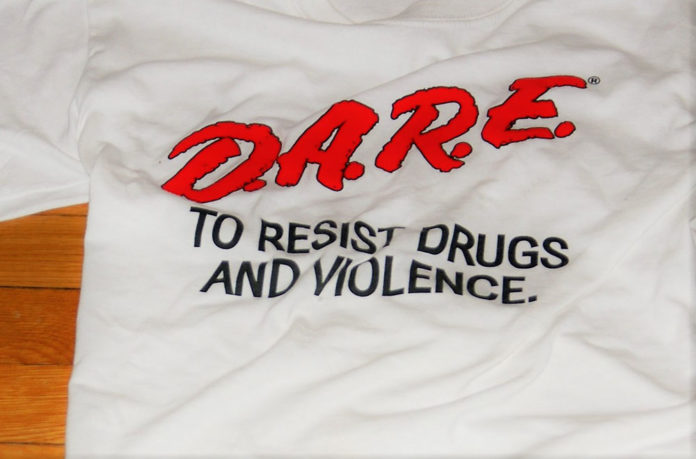 The most popular anti-drug use program in the nation, the Drug Abuse Resistance Education (DARE) has been evolving for the past 35 years and a mark of its progressing efforts is a new curriculum that was announced this month to be implemented across the nation.

DARE’s new curriculum aims to provide law enforcement officers with the ability to lead programs that target K-12 classrooms, families, and other community members. The programs in the new curriculum were developed in response to the current national epidemic and specifically look to curb opioid abuse as well as the rising number of prescription drug overdoses.

The comprehensive new curriculum, announced on September 13, is going to be offered for free to schools and communities. It will feature rigorous but informative lessons designed specifically to capture the attention of particular age groups, parents, and neighborhoods.

Students will get to learn about illicit opioids, opioid-based prescriptions, and over-the-counter medications. They will also learn how to read the labels of the medications and understand facts about the drugs.

The emphasis of the lessons will be on how to understand the importance of not misusing certain substances and the fact that poor decisions surrounding prescribed medications have led the country to the epidemic.

The students will be required to identify signs of the U.S. health crisis involving opioids and learn the reasons why teens are more vulnerable to prescription misuse than other age groups. Information regarding poison control will also be shared with the students and the community.

The new opioid abuse prevention curriculum is an extension of DARE’s ‘keepin’ it REAL’ curriculum, which was initially delivered in 2008 to middle-school students.

Keepin’ it REAL — created by a team of scientists at Pennsylvania State University and Arizona State University with financial support from the National Institute on Drug Abuse — brought about significant changes to DARE’s teaching style. Instead of having kids watch lectures, keepin’ it REAL lessons invited students to work collectively on improving their decision-making skills during high-risk situations, under the guidance of a trained DARE professional.

DARE was launched in 1983 after members of the Los Angeles Unified School District and the Los Angeles Police Department established a partnership to educate elementary school students on the dangers of drug use.

The curriculum originally featured 17 lessons with information about different drugs and emphasis on their negative effects. Although theoretically discussions were encouraged, the majority of the lessons did not allow the students to interact with the DARE officers.

The year before DARE was established, amidst the War on Drugs, former First Lady Nancy Reagan visited an elementary school in Oakland, California to talk about the dangers of drugs. When a student asked her what to do if they were offered drugs, Reagan said: “just say no.”

From the early 80s to the 90s, DARE embraced the phrase and ‘just say no’ was incorporated into a number of anti-drug advertisement campaigns.

‘Just say no’ no more

In 2009, more than 20 controlled studies were cross-analyzed and researchers found that DARE’s ‘just say no’ campaign was not effective in preventing drug abuse.

‘Just say no’ was also found to perpetuate a stigma surrounding people struggling with substance use disorders, which can prevent those who need help from seeking treatment.

Twenty years ago, one study went further than simply highlighting that DARE had failed to prevent drug use among youths. Instead, the study noted significant increases in drug use among suburban students following participation in the program.

A number of other researchers followed suit and led studies that managed to debunk the program’s effectiveness. Some argued that telling kids to ‘just say no’ makes them covertly want to say yes.

The controversies and backlashes surrounding the effectiveness of the program pushed DARE members to work to improve and update their approaches rather than sticking to the harsh drug policies used in the past.

Representatives of the program have stated that they aim to help students make better decisions rather than passing a message of zero-tolerance or instilling fear in students.

For over 20 years, DARE has had international programs implemented in more than 50 countries. However, the aforementioned studies have led to a decline in the popularity of DARE’s campaigns and programs on a national level.

A 2012 study revealed that since the mid-2000s approximately 60 percent of the participating school districts in 32 U.S. states had eradicated the program.

The national trend of DARE’s decline appears to be changing though. In recent years, the popularity of the program has been rapidly increasing across the U.S. and the fact that DARE has been making efforts to embrace evidence-based approaches is likely related.

A number of states that have used the program’s curriculum for decades have recently started seeking ways to allow DARE to expand its local presence again.

For example, Georgia has implemented the DARE curriculum for approximately 20 years in the Athens-Clarke County region and, this month, officials have released a statement calling for an expansion of the program. State officials hope to curb the effects of the opioid epidemic by having the curriculum taught to students of all grade levels.

This month, a 5-kilometer race was hosted by DARE officers in Arkansas to support the program as well as local initiatives.

Organizations such as the Lions Club International have and continue to support the local chapters of the program by donating millions of dollars to different cities that implement the curriculum.

From Irvine to Niagara Falls, police departments that feature a DARE unit or DARE officers who have received special training for at least 80 hours can be seen.

This month, a number of middle schools have announced the expansion of DARE’s curriculum or the inclusion of the program’s materials in select health classes. Article Name
The Evolution of America’s Most Famous Anti-Drug Use Program
Description
The most popular anti-drug use program in the nation, the Drug Abuse Resistance Education (DARE) has been evolving for the past 35 years and a mark of its progressing efforts is a new curriculum that was announced this month to be implemented across the nation.
Author
Livia Areas-Holmblad
Publisher Name
Addiction Now

Vaccine that Prevents Opiate Addiction May Soon be a Reality