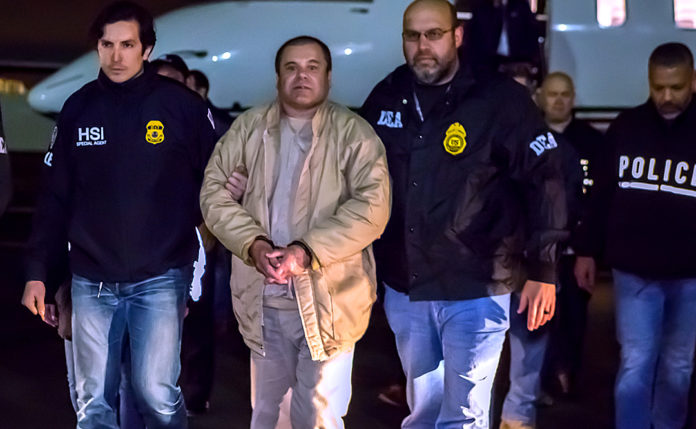 Along with money and drugs, what the first month of this trial brings to light are the violence and corruption which addiction engenders:

The gruesome and tragic stories behind how drugs go from being produced to being consumed. And the countless lives that are lost in the process.

Nothing is off-limits in the world of drug trafficking. Officials are extorted. Innocents are caught in the crossfire. And any weakness is swiftly taken advantage of.

The first witness called by the prosecution, Jesus Zambada, gave us an unfiltered look at how the drug world operates. From his testimony as Guzmán’s former right-hand man in the Sinaloa cartel, we can see how status and territory are maintained, particularly through violence and bribery.

In one situation, Zambada described how El Chapo had a man and his wife assassinated simply because the husband, a member of a rival gang, refused to shake his hand.

In another, a dirty cop who worked for another drug lord, Arturo Beltran Leyva, was brutally gunned down on his front steps after one of El Chapo’s men duplicitously shouted that his son had been run over.

Throughout it all, these actions have been allowed to continue through the consent and support of local and federal police.

Already many claims have been made of high-ranking Mexican officials accepting bribes. Everyone from the secretary of public security Genero Garcia Luna, to former secretary for Mexico’s president Gabriel Regino have been implicated in the course of this trial.

Zambada detailed how, in one instance, they even had a police escort to help Guzmán escape.

When Guzmán became alarmed at the sight of the police car trailing them, Zambada said, ‘Don’t worry. These are our people. They’re here to protect us.’”

Another witness, Juan Carlos Ramírez Abadía, who had been Guzmán’s main cocaine supplier, discussed how he ran his own business for which he committed at least 150 homicides.

“It is impossible to lead a cartel in Colombia without violence,” said Ramirez, when cross-examined by prosecutors.

And, like in Guzmán’s cartel, death was not restricted to those who were guilty.

According to detailed ledgers that Ramírez kept, he once paid hitmen $338,776 to kill a man whose brother had been colluding with the U.S. government.

The stories go on.

However, what this notorious figure and these gruesome tales belie is that these deaths, these acts of atrocity would likely have happened, are likely still happening, and will likely continue to happen as long as people continue to support these organizations through the demand for illegal narcotics.

This is evident in the fact that this violence is perpetrated not only against rivals or outsiders, but also against its own members. Those who make a mistake, who try to join another group, or who attempt to abandon this way of life are condemned and quickly made an example of.

In fact, the only acceptable way to leave this industry is in a body bag.

On Nov. 20, a former member of the gang Los Guerreros was gunned down after his launch party for a memoir he wrote on how he managed to leave behind a life of crime.

The day before that, Héctor Beltrán Leyva who is Guzmán’s cousin and the leader of the Beltrán Leyva Cartel died of a heart attack while in a Mexican prison, an event which Mr. Guzmán’s lawyer called “suspicious.”

In many ways the drug trafficking world is not an industry controlled by kingpins and drug lords, but rather an institution that takes advantage of people in bad situations who have nowhere else to go.

Ramírez’s frontman, Mr. Rosano, was a former public defender who had been dragged into the world of drug trafficking after someone made threats against his life. In order to pay Ramírez back for his protection, he began working for the drug lord in the North Valley drug cartel.

Even Guzmán had little choice but to turn to drugs, as the prosecution’s second witness Miguel Angel Martínez, a person who has been there since the start of his career, described.

“He was a very poor person who didn’t have anything to eat. And that was the reason why he got involved in drug trafficking.”

According to Biography.com, in addition to growing up in a poor family, El Chapo also had an abusive father who was involved in the drug trade.

As a teenager, Guzmán was kicked out of his family home. With no formal education, he sold small amounts of drugs in order to provide for himself. Guzmán described to Martinez how, every day, he would scrape the milky substance from poppy flowers in order to make heroin.

From his beginnings as a low-level supplier, he slowly rose in the ranks of the drug world hierarchy to become kingpin.

However, this is not as much an example of enterprise, as it is of opportunism.

While movies such as The Godfather would have you lionize these men and their seemingly unlimited power and wealth, they are no more in control of their fates than any low-ranking member of their gang.

And while we remain fixated on these lone figures, we will never get to the root of the problem.

While it is yet to be determined whether or not El Chapo is truly a scapegoat, his sentence alone will not decide the outcome on the war on drugs.

Therefore, we should not settle for putting away the men and women who are, in some ways, no more in control of their fates than the people whom they are supplying.

The best way to get back the sum of what we’ve lost to addiction is not by attaching a $14 billion dollar price tag to a drug lord, but by prioritizing the health and safety of the billions who still struggle with addiction.

Drug rehab patients with ADHD use cocaine at an earlier age

Opioid use disorder raises odds of death by ten times in...